What are the different types of marijuana? 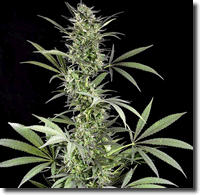 As a general rule of thumb, Indicas tend to be shorter, stockier plants with smaller, denser, and smellier types of marijuana buds. Indicas also flower much faster than Sativas, usually with a 6-9 week flowering period. Sativas will grow taller and generally much bigger than other types of marijuana. Buds will also be bigger but less dense. Sativa buds are less smelly and take longer to flower than Indicas, usually 9-10 weeks.

Types of marijuana are often a cross between Sativa and Indica giving characteristics of each i.e. to make certain Sativa plants smaller and more potent, or an Indica plant larger and with bigger buds. When it comes to the effects of taking this drug, also known as being high, different types of marijuana produce different feelings in the user. Sativas will tend to produce more of a cerebral, energetic, or giggly high while Indicas produce more of a body stoned effect known to enhance physical aspects such as sound and taste and can also have a relaxing effect.

The Different Types of Marijuana:

SATIVAS - The polar opposite of Indicas. Sativas are tall, thin plants with narrow leaves and light green colors. These plants grow quick and may extend to heights of 20 feet in some cases. Origins are traced back to Mexico, Columbia, and Southeast Asia. Flowering times vary from 10 to 16 weeks, normally longer than Indicas.

INDICAS - Indicas are short, thick plants with broad leaves and dark green coloring. Flowering takes place in 8 to 10 weeks with thick dense flower tops. These plants produce flavors from stinky skunk to fruity sweet. Origins are traced back to Afghanistan, Morocco, and Tibet.

FEMINIZED - Designer qualities to produce only female plants. Rarely are the seeds produced but can be forced. They are usually passed on as clones.

CROSS BREEDS - Combining different Sativa and Indica breeds will produce the corresponding traits of each mother and father. Actual percentages each strain will contain are not exact, but pretty close.

White Widow - The white widow marijuana type is considered perhaps the most potent cannabis in the world. The buds always have so much THC on them that it is hard to see the green color of the bud at all.

Northern Lights - Northern lights marijuana has big broad leaves and large crystal covered buds. This is not a big plant growing to about 1.5 m outdoors and a little bigger indoors.

Super Skunk Weed - Super Skunk is a beefy original Skunk #1 type. Matches the potency of the hashish you find in Amsterdam coffee shops.

Big Bud - The yield of this Indica type of marijuana is known to produce massive buds with gigantic leaves.