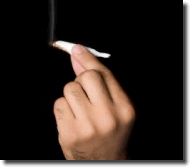 Marijuana Joints - A marijuana joint, sometimes called a "j", "doobie" "jifter" or "spliff", is made by rolling up marijuana, either manually or with a rolling machine, into cigarette paper, forming a cigarette-like product. This is one of the more popular methods of marijuana consumption because marijuana joints are small and extremely portable, and a well-rolled marijuana joint is easy to use and pass along to others.

Marijuana Pipes - Marijuana pipes sometimes called pieces or bowls are simple devices by nature. Generally, they involve a tube-like shape that curves upwards at one end. Marijuana is placed into one end (called the bowl), lit, and then the smoke is sucked through a small hole in the bottom of the bowl, through the chamber and into your mouth at the other end. Pipes are sold in a variety of sizes, usually made of blown glass, metal fittings, ceramic, borosilicate, stone, wood, bamboo and other materials. Blown-glass pipes are often intricately and colorfully designed, containing materials that change color or become more vivid with repeated use. A crude pipe can be made in a pinch with nothing more than tinfoil. Marijuana pipes are easy to use, and usually less fragile than a bong, but lacks some of the nicer effects, such as cooling.

Marijuana Bongs - Also known as water pipes, the most basic of these contraptions are basically an advanced pipe. However, as the smoke is pulled through the bong, it goes through a sizeable amount of water. First off, as long as the water's cool, this has a nice effect on the temperature of the otherwise-hot smoke, making it very lung-friendly to novice smokers. Also, it takes out a portion of random particulate matter from the smoke, making the hit a bit cleaner and smoother. Once again, marijuana bongs can be bought or made, but either way they're usually fairly sizeable, and fragile.